Meet The First City In America To Be 100% SOLAR! 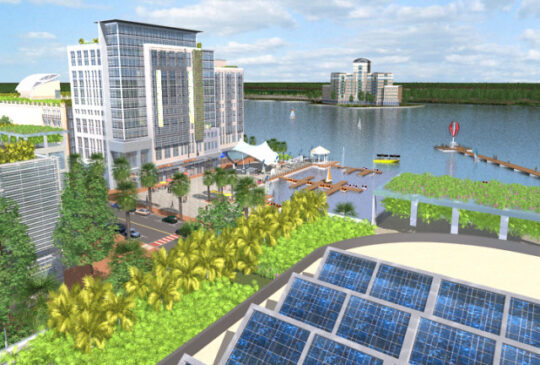 Meet The First City In America To Be 100% SOLAR! Babcock Ranch Florida is the very first town in America to go fully solar. A massive undertaking that could not be done without “collaboration” because of its enormous size.

No one wanted to take on a clean energy project of this magnitude. The primary reason was the politics of clean energy. That didn’t stop Syd Kitson because he had a vision. Because of Syd Kitson’s vision, Babcock Ranch has become a reality.

Babcock Ranch is a master-planned community located in southeastern Charlotte County and northeastern Lee County Florida consisting of approximately 17,000 acres. The planned community was approved as part of a public-private partnership with the State of Florida and local governments.
The deal established the neighboring Babcock Ranch Preserve.

The plans were announced in 2005 because of real estate developer Syd Kitson’s vision. Because this was a huge complex real estate transaction, it took some time. It required the largest conservation land acquisition in Florida history. In 2009, the company joined with Florida Power & Light to announce plans to make Babcock Ranch the first solar-powered city in the United States. So a continuous expansion of large photovoltaic panels will create a power station.

The network of rooftop solar panels on commercial buildings was planned so they could create a surplus. The city wants to be prepared because of future growth.

The goal is to send more power to the Florida electrical grid than the city consumes. The city wants to be prepared for growth so they require more production than they use. Babcock Ranch is a success because solar is now cost-effective.

In 2006 the sale of the land for Babcock Ranch about 91,000 acres in Southwest Florida, near Fort Myers. This was the largest land deal in the state’s history. Kitson & Partners, led by CEO Syd Kitson, Started on one of the most ambitious projects in Florida history. Because of this acquisition, creating America’s first solar-powered town became a reality. This couldn’t happen without Syd Kitson’s vision and passion for the environment. After Kitson successfully bought the property, over six times the size of Manhattan for $500 million the project started. Syd Kitson was quoted by The New York Times, “This is how I’m going to change the world.”

Solar in Florida makes sense because it’s the Sunshine State. Financing a solar system is worthwhile because the Return On Investment is in the consumer’s favor now. Meet The First City In America To Be 100% SOLAR!

CONGRATULATIONS TO BABCOCK RANCH FOR BEING The First City In America To Be 100% SOLAR!

Babcock Ranch just northeast of Fort Meyers is the first city in the country to run on 100% solar, thanks to CEO Syd Kitson’s vision.