How To Prepare for Going Solar 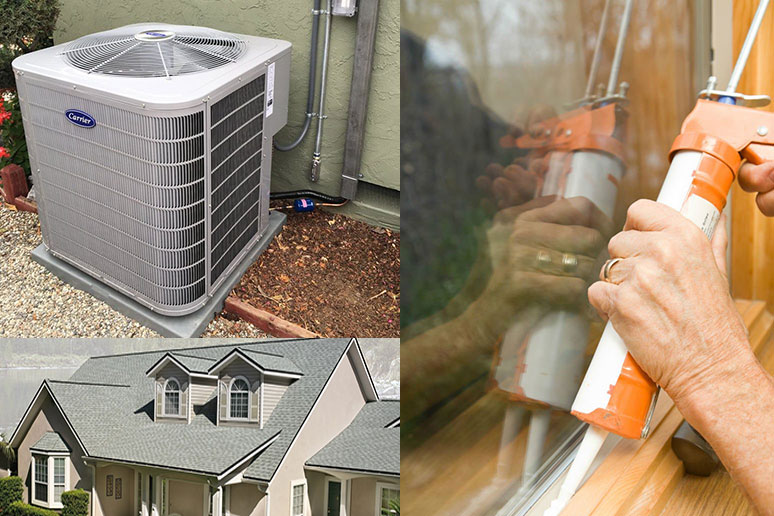 The best way of how To Prepare for Going Solar is to get a roof inspection if needed and air-conditioning system replacement. Replacing both will save you money and lower your power consumption, sometimes quite dramatically. It’s not as important to be concerned with A/C in many northern states because it’s cold. But homes heated using electricity can also have outdated equipment that’s in-efficient.

Through time a roof and A/C pay for themselves because of improved efficiency and increased home value. In most cases, the rule of thumb is to replace any AC unit 10 years or older because it can have a dramatic effect on lowering power consumption.

Below Is a Table for How To Prepare for Going Solar. The Objective Is To Achieve As Close As Possible What A Homes Monthly Average kWh’s Usage Is. This Will Determine The Size Solar System A Home Requires.

Doing the Following Home Improvements will Improve Energy Efficiency and Reduce the Size of the Solar System Needed.

The Following Is a True Story

I was working as a full time IT tech and sales rep for a Florida solar company. In September 2018 I get a call from a gentleman and he wants to talk to me about solar. He proceeds to explain to me for no obvious reason he has received two consecutive power bills for over $1200 each. The two power bills were for July and August, so that was the two hottest months of the year in central Florida. After examining all the factors the bills were extraordinarily high.

On September 29th, 2018 I meet the client and we discuss all the variables about what could be causing this outrageous power bill. He tells me he bought the home four months previous to receiving these outrageous bills. He got a really good deal on the home, gorgeous home. So the natural thought was this was one of the reasons the previous owners wanted out. Let’s get this out of the way very quickly, he wasn’t growing Marijuana.

He then explains to me that he had an energy audit and they told him the power bill was legitimate. They told him it could be the pool pump or the AC unit causing the extreme power bill but they couldn’t be certain. Receiving a power bill that’s more than your mortgage shatters any budget plan for any homeowner.

The A/C Unit Was The Culprit

Having knowledge of all the different factors involved I was able to insure him we could definitely help his situation. I was hyper-focused on the AC unit because upon further investigation the AC was over 13 years old. So I assured my customer that replacing the AC was as equally as important as the solar system. I explained to him we are contractors, so we can do the AC unit and the solar system.

I know this sounds expensive but his payment without the tax credit was $450 a month compared to a $1200 power bill. He packaged the A/C with the solar and financed for twenty years for a $450 a month payment. I explained that he could still potentially receive a power bill up to $200 a month for 2 peak months of the year. That’s $650 a month for two months and for the rest of the year, he would likely have no power bill.

The Savings Were Immediate

After replacing the A/C unit I followed up with my customer about getting his solar system turned on. He informs me he has received the first power bill after replacing the A/C and it was $450. This tells us that his power bill was so high because of the air conditioner. This was great news because the size of the solar system he bought was going to produce close to his monthly kWh’s being used. The power bill was partially the old A/C and the new A/C so the power bill was probably going to be even lower. Keep in mind the bill was for September power usage, in Florida September is a very hot month.

The general rule of thumb is if a roof is no more than 7 years old it’s okay to do solar. A roof 7 to 9 years old well kept in good condition can install solar without concern. The key is a roof should be in Good to Excellent Condition before going solar.

A 10-year-old roof or older is a challenge because it will need replacement within 5 to 8 years. Timing is critical when it comes to maximizing your ROI with home solar. Bottom line is to consider replacing the roof if needed because just like an A/C unit, new roofs are more efficient.

As far as solar installation is concerned, they do very little penetrations to the roof if any at all. They stand behind their work and will address any installation issues going forward.

Re-Caulk All Windows and Doors

This is one of the cheapest steps for improving home energy efficiency. Windows are one of those things that are a contractor’s nightmare. The same windows with the same installers get different results when it comes to efficiency.

It’s best to reseal all your windows every 3 to 5 years in Florida because the weather is hard on caulking. That’s another way of How To Prepare for Going Solar.

LED lighting is the best energy-saving technology in decades. They burn cool, last longer, and are amazingly efficient. I challenge anybody to replace all the regular bulbs in their home and you will see a lower power bill. LED bulbs are expensive but well worth the investment. LED Lighting one more way of How To Prepare for Going Solar.

LED lighting also gives homeowners a lot of flexibility for creating mood, ambience,  and it adds a touch of elegance that wasn’t possible with traditional lighting.

In Florida, attics get extremely hot and installing additional vent fans and blown insulation improves efficiency and lowers kWh used. That’s another way of How To Prepare for Going Solar.

Any homeowner that makes all these improvements will have as an efficient home as possible and a power bill to match.

These improvements will help folks with high power bills that are $225 and up because they are expensive improvements to make. A power bill any lower is not going to improve as dramatically unless it’s $200 and you know it’s too high. Then you can probably get the bill reduced to $110 to $125 it might be worth making all of these improvements. The lower the power bill the smaller the solar system needed which is additional savings.

How To Buy A Home Solar System

Now that you have completed what’s needed before installing solar, you’re ready to go solar. The beneficial part of preparing for solar is you will need a smaller system, which will result in thousands of dollars in savings.

At this point, you want to receive at least 3 months of power bills to compare to the year before to determine the right size solar system.

Once you’ve received three months of billing you are ready to go solar. Now the question is, how do I get the best deal? That’s where “Your Solar Advocate” Consulting Firm comes in because you can get a home solar system at wholesale cost. That’s another way of How To Prepare for Going Solar.

Get everything for cost with total guidance from the first step to the last step. We provide the expertise needed to be sure you have the most efficient system for the lowest price without sacrificing quality.